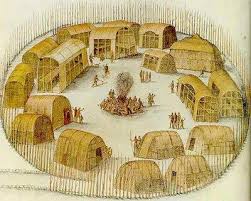 Home to a number of Native American tribes, this area flourished with natural resources. In the town of Claremont, there is a monument to the Quiyoughcohonack Indian Tribe, commemorating their meeting with the early colonists before construction of the Jamestown fort was begun the following week. Jamestown became the first permanent English settlement in British North America in 1607, and early occupation of "The Surrey Side" by Colonials and their retinue was part of the Corporation of Jamestown. James City County was formed in 1634, and colonists owned property on the north and south sides of the James River. Ferries crossing the James River connected the two sides. Plantations and small family farms thrived as the colony prospered. Many of today's county citizens can trace their genealogy to its original occupants and colonial settlers.

The "Surrey Side" as it was referred to by the colonists, was home to a converted Native American youth, Chanco, who saved the English settlers from imminent annihilation at the hands of the native people in 1622. The county has a monument in his memory on the lawn of the Historic Courthouse. Surry County's history closely mirrors the history of our developing nation as colonists continued to settle on land that had been previously occupied by the indigenous population. One tract of land that was freely given by Chief Powhatan to John Rolfe upon his marriage to Pocahontas in 1614 is now preserved as part of Smith's Fort Plantation.

Surry County was incorporated in 1652; it extended from the southwest side of the James River all the way into current North Carolina.

In 1656, Benjamin Doll, a freeman of African heritage secured a land patent for 300 acres in Surry County. Built in 1665, Arthur Allen's brick house was later occupied by Nathaniel Bacon and his followers as they staged the first rebellion against British colonial rule in 1676 - thus, it would forever be remembered as "Bacon's Castle". Remarkably, Surry County petitioned the Virginia House of Burgesses to stop the importation of slaves to Virginia. The petition was denied.

Following the American Revolution, legislation was passed in 1782 allowing slave owners to emancipate their slaves without obtaining the governor's approval. Samuel Bailey, a Quaker living in Surry County, was the first person to free his slaves under the new law. By 1860 over a third of the Blacks in the County were free, and many owned farmland and businesses here.

By the end of the Civil War, Surry was home to several Black houses of worship, and in 1887 Goodman Brown, an African-American from Surry, was elected to the House of Delegates representing Surry and Prince George Counties. He owned five tracts of land totaling 226 acres on which he farmed corn and peanuts.

Surry has always been an agricultural community with a great deal of its 281 square miles producing peanuts, soybeans, wheat, cotton, corn and other grains. Cattle, dairy and hog farms have also flourished here along with logging and timber harvesting enterprises.

In 1971 construction began on the Dominion Nuclear Power Station which is located on the James River adjacent to the Hog Island Wildlife Management Area.

The Surry County records of land transactions are some of the most comprehensive in the nation. They were spirited away to safe hiding places twice during its history: once to protect them from destruction during the American Revolution, and again to preserve them during the American Civil War. Surry has taken great care to preserve and protect their legal county records, from 1652 to present, and continues to house them in the Historic Courthouse. 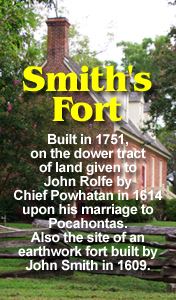