There’s an old saying about two kinds of secrets. One kind is not worth keeping at all and the other is too good to keep to yourself.

That’s why we can’t help but share all of Surry County‘s lesser-known historical highlights, exhilarating outdoor jaunts, and charming accommodations with their own stories to tell. Here are just a few of the many significant sights and experiences available in Surry County.

Just across the James River from Jamestown, you’ll find Smith’s Fort Plantation. This property is the site of a second fort attempted in 1609 by Capt.  John Smith. The effort was abandoned as the Jamestown Colony suffered through the “starving time” resulting in a lack of manpower and supplies. The same land was later given to John Rolfe by Powhatan to serve as Pocahontas’ wedding dowry. In 1751, Jacob Faulcon constructed the manor house here, which was later purchased by a collective group of Black families during the Reconstruction era. In the early 20th century, John D. Rockefeller funded restoration of the property. Once completed in 1933, Preservation Virginia acquired the grounds that they still maintain today. There are a number of ways to experience Smith’s Fort, from guided tours to self-guided cell phone experiences with maps and audio.

Another historical sight that cannot be missed is Bacon’s Castle. The oldest brick home in Virginia, Bacon’s Castle was built by Arthur Allen in 1665. It earned its moniker in 1676 when Nathanial Bacon’s men occupied the home during an uprising later named Bacon’s Rebellion. Bacon led a group of indentured servants, slaves, landless immigrants, and former servants against Virginia governor William Berkeley. Bacon wanted Native Americans removed from Surry to provide more land for himself and his followers, whereas Berkeley feared doing so because he felt the neighboring tribes might unite and declare war. After Bacon’s forces were ultimately defeated, Virginia changed the language of its laws to distinguish between blacks and whites. This was done to prevent multiracial uprisings in the future; unfortunately, it resulted the permanent enslavement of future persons of African descent. The institution of lifetime slavery meant African American people in the South would not see freedom for the next two hundred years. Today, guests can explore these storied grounds where American history was made.

While most of Surry County can offer views of a bygone era, few are as unique as Chippokes State Park. One of America’s oldest working farms (dating back to 1619), the park includes a Farm and Forestry Museum detailing the lives of local farmers, fields of soybeans and cotton,  Chippokes has one of the most diverse state park offerings in the country. The park grounds also feature an antebellum mansion and English gardens, in addition to modern amenities such as rental cottages, yurts, and campground. Chippokes State Park delivers a wealth of experiences for every traveler.

For the adventurous visitor, the Chippoax Trace Trail provides a historical road like no other. The shaded path dates back to the 1660s, where it was once utilized as a dirt thoroughfare for farmers traveling to the James River with their wares. This “Chippoax Road” is the first documented road south of the James River. Eventually, portions of the road were paved, and one landowner even charged a toll for merchants and farmers in order to maintain the path’s upkeep. Although the road was thought to be lost to history, Chippokes staffers have worked to recreate the trail using historical documents and research. The trail now runs one mile between some of the most scenic and historical aspects of the park. 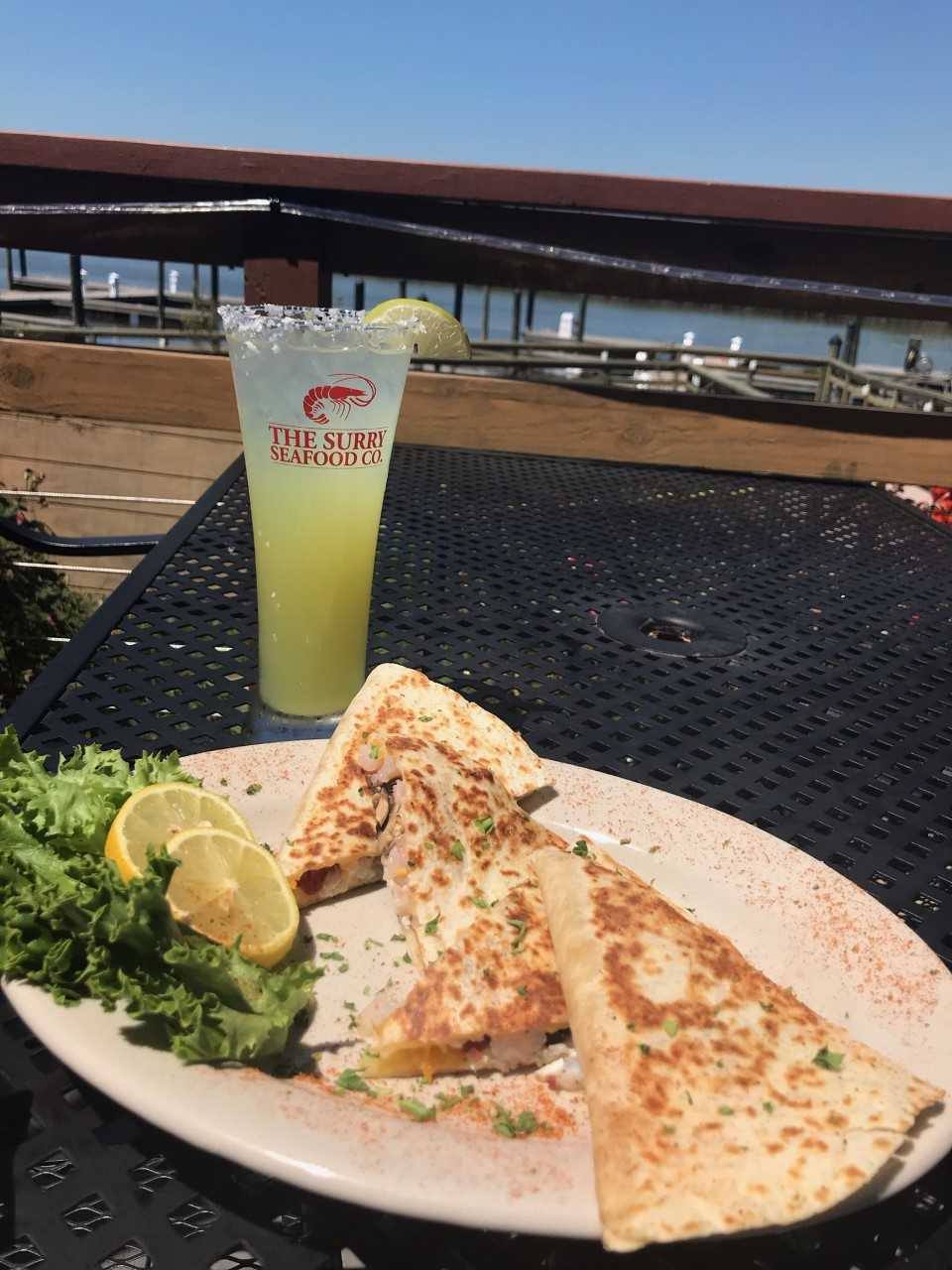 Visiting places of note can make one draw an appetite, so shouldn’t the food be just as memorable as the sightseeing? Surry Seafood Company Restaurant is your best bet for a delicious meal steeped in significance. Located on Historic Gray’s Creek , this notable landmark is a dining dream. Nothing sounds as refreshing after a long day of exploring quite like a Surry Spiked Lemonade or one of their other signature cocktails. Stop in for lunch—the Crab Dip is a perfect starter before devouring Crab Soup, a Salmon Caesar Salad, or a Crab Sandwich. Then, come back for dinner and do it all over again. This time, begin with Oysters Rockefeller and make room for the Flounder Meal or Surf & Turf. Whether it’s local word of mouth or the excellent online reviews, everyone agrees that Surry Seafood is a culinary must.

Even Surry County’s lodging options carry cultural significance. Every structure here has a story, an origin rooted in America’s past. Take the Palmyra Inn, for example. Located on a farm close to historic Williamsburg and Jamestown, the Inn was built in 1745 by one of the first settlers in the area. You can still watch cows graze on the property as you immerse yourself in traditional country living.

Another home steeped in history is the famous Lightwood House. Spend a weekend amid the property’s hundred plus acres of old-growth beech forest or simply explore the intricacies and surprises of the home itself. The estate is built on land gifted to Pocahontas and John Rolfe as a wedding present, making it culturally significant in American lore. If these properties are already booked, try a coastal experience instead.  There are several James River cottages also located on land once owned by John Rolfe. These cottages include private beaches, many water-related excursions, and proximity to historic attractions.

The Secret is Out

Whether you’re a history enthusiast or simply a fan of the great outdoors, Surry County affords plenty of opportunities to enjoy both. Come for the parks and the past, then stay for the exceptional meals and unique accommodations.